Some of you will smile at this: Bullwinkle, dressed like a magician, stands on stage, top hat in hand. He says "Hey, Rocky! Watch me pull a rabbit out of my hat!" And Rocky always replied with a semi-whiny "Again?!"

Back in September 2008, My house flooded and I lost practically everything I owned. The culprit: contractor garbage and a large tree felled by nearby Municipal construction blocked the large drainage canal that runs behind My house. The damming forced the water into the town's streets and down into My lower cul-de-sac. In less than 2 hours, the water rose to 4 feet above street level, some 28 inches inside My house.

That happened after several days of heavy rain and a storm that had gone on for almost 6 hours. But what happened this past Friday--the 13th for those keeping count--happened in about 10 minutes with barely one hour of heavy rainfall.

Here are the pictures: 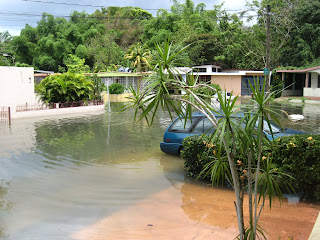 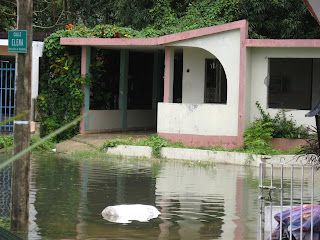 These are the street views from the balcony of My house. The cul-de sac has an empty house, partially destroyed by the September 2008 flood, seen fully in the second picture.

Was the canal blocked? No, I checked, and the water raged through it like it was supposed to. So what was the problem? 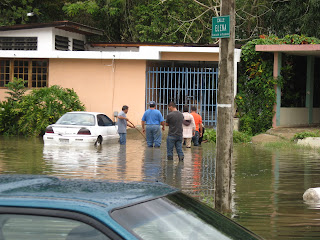 The drainage system for this street--a street that sits at the bottom of a shallow bowl that drains almost 2 square miles--was blocked. Not blocked by debris, or at least, not visible debris. No, it was blocked because the drains and manhole covers were paved over.

Paved. Over. The Municipal employees in the picture above were searching for the drains and/or manhole covers, to no avail. But I'll point out that the man holding the large staff and actually appearing to do work was not a Municipal employee: he's one of My neighbors.

When was the paving done? October 2010, as part of a "prep" for destroying the house to make way for the new floodgate system. Did the neighbors complain? From the day the paving was completed, ostensibly by a company that the Mountainous Mayoress favors with alarming frequency. So what about that abandoned house, trumpeted last fall by the Largely-Immobile Mayoress, one Perza Rodríguez? Well, you can see it was still there, still abandoned. 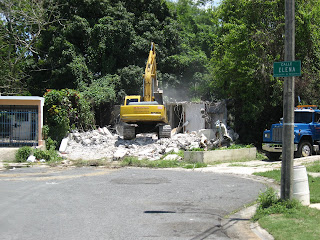 Around 10:40 AM, those two vehicles in the picture rumbled down My street and proceeded to demolish the hell out of the house. See the roundish different-colored patch on the street "beneath" the digger? That's where the manhole cover is, under some 9 inches of tar. And to the left of the rubble is where the drainage duct is supposed to be, also under several inches of tar. The water pump is to the right of the blue truck, but it pumps when water comes into it: with the drains to it blocked, the pump is a paperweight. With barely 2 weeks to go before the official start of the hurricane season and some 7 months after the "start" of the Mayoress' water gate, only now is the project on the front burner.

Now I know Her Mayoral Mountainous has a lot on her plate. A lot. Often 4-5 times a day. But even with a lot on her plate, a project like this, less than a mile from City Hall and one that threatens some 20-25% of the businesses in town, is not chopped liver. What you see above is the result of a one-hour thunder storm with the canal running free and clean. Imagine what will happen if We get another sequence with 5-6 days of near non-stop rain.

You don't have to imagine. Look at the 4th picture. Note the light pole on the right. Beneath the Calle Elena sign is a painted line. That's how high the water rose when Hurricane George hit My Island in 1998. That line is 6 feet 2 inches above street level. Back in 1998, it took almost 30 hours of rainfall to reach that level, on saturated ground, with a semi-blocked canal.

Based on this last rainfall, even with a canal running clear and dry ground, My street could have seen a similar flooding in less than 6 hours.

Do you think I'm sticking around to see how much I lose this time? I don't care if Her Mayoral Gargantuaness eats her way through the summer, but I'm not slogging through My street in thigh-high water to retrieve My last intact possessions again.

Paved over manholes and drains... I still can't believe it. Who in their sane mind would do something like that?

I think I know where you are. I have passed near there or there like thousands of times (I have some friends who live near there or in other parts of Cabo Rojo), and as I know, there's a body of water (I think is a pond or a small creek, not sure) pretty near, and actually, there are too much problems very near, like craters in the streets and few or none lights at night. Thing is, they ca say anything about Cabo, but it's still fucked up. Haven't saw the changes, although I haven't visited it since March this year. Still, Perza is a irresponsible person. I freaking care if she sings or is undergoing a diet, but she doesn't really care about the city as she does about herself.

Prometeo, never underestimate the stupidity of a bureaucracy. I have to keep reminding Myself of that.

Ms. Conciencia, it rained again today, heavy but not as much as last Friday. In 40 minutes, the street was flooded to the point where I moved My car to keep it from getting swamped again. This happened despite the house being almost totally destroyed (not much of a difference, really) and the manhole cover leveraged up by the hard-working neighbor. The rain dwindled to a stop within 80 minutes and the street cleared up in about 25. But for about half an hour, We calculated that for every gallon going down a small hole, some 7-8 gallons were rushing in from the neighborhood and surrounding land. In other words, unless the water canals or gates a re finished before a 2-3 day rainfall--like what the north and east side of PR have gotten this past week--Our houses will definitely flood again. There's simply too much surface water rushing in for a 28-inch round hole and 3 drains totaling 9 square feet of access space.

But, if you're in the area and want to visit Me, feel free to do so! Just make sure you don't have to swim to Chez Jenius, okay?

It seems to be a common trend to cover the sanitary manholes when they pave the roads. We did a study in Rincon and Moca in 2007 and had to go breaking the asphalt to access the required manholes to be inspected.
Regarding the flooding, you do bring a point, your neighborhood floods very fast, with a short duration storm. Something must have changed. Did some state hydrologist go to investigate? Sometimes unauthorized construction, change in slopes and addition of drainage areas change the floodplains of a site. It is a simple balance. If more water enters the system than can be taken out with pumps or gravity drainage the water accumulates.

By the way, if it is a common ocurrence it would be a good idea to have an electrically operated trash pump with a float sensor to redirect the waters downstream. You'd feel like living in Matadero Street in Puerto Nuevo.

Beato, your observations are noted and I can tell you We do have a pump nearby (I mention it in the post), but it's triggered by a certain amount of water volume: if the water doesn't get there, it doesn't do anything. Today I noticed every manhole cover and drain near Our area (7 all told) were erupting water before the level rose to "get the car out now". Seems to Me that shows the drainage system is heavily clogged and adds to the street-level rivers I saw again today. Thanks!