You know these places. You know what the offer. But did you know they are amongst the lowest-paying companies in the U.S of part of A?

According to a 24/7WallStreet.com article, these companies, along with Sears, Macy's, Target, Starbucks, Kroger, Olive Garden and Red Lobster are in the group of the 10 lowest-paying cheapskates.

But unless We work there, what do We care? "Bring on the low prices," We say!

To the employees of these companies, whose average wage is under $10 an hour and most are limited to part-time work to avoid getting benefits, the reality is very different. There's a reason the government tracks a category called "working poor."

Did you know there's a company that made $17 billion in annual profit, paid virtually no taxes in almost every state, has over 1.4 million employees and is by far the company with the most employees receiving food stamps and welfare support? In fact, in some states, their employees are the single-largest group of welfare recipients? Did you know that company is Wal-mart?

And what do you care, right? You don't work at Wal-mart. Bring on everyday low prices!

Okay, but who pays that welfare support to Wal-mart employees? It isn't Wal-mart, who protects its profits with canny accounting. It's Us. Our taxes subsidize Wal-mart underpaying its employees. In effect, We pay for these employees, as We do for those who work in McDonald's, Sears, Pizza Hut and the rest.

You might say that people have to work and at least these folks have a job. Wrong point. Look at the other end: $17 billion in annual profit. How much of that is needed to raise wages to a level that gets Us--you and I and Our taxes--off the hook, so We stop providing welfare to employees and the companies that underpay them? Did you make $17 billion in annual profit last year? So why should your money underwrite the company that made that much and expects to make more this year?

The argument for establishing a "living wage" minimum, which can range (according to whose numbers you believe) from $11 to $25 an hour, is based on the idea that when people earn enough money to sustain themselves, they need less welfare. They can thus consume more and as We have all learned from Saturday morning TV ads, consumption makes the world go round.

The companies listed above are vehemently opposed to a "living wage." Wal-mart and many of these companies are also vehemently opposed to unions, who can organize to negotiate one. Cynically, the opposition is because these companies will then have to get off the welfare teat and actually work for a living. The specific driving force is that the shareholders want profits and profits are harder to come by when the monies have to be paid to the employees, rather than letting the state and federal governments pay out.

But are profits really that hard to come by when paying a living wage? Costco has routinely kicked Wal-mart's Sam's Club ass year after year, generating more sales per square foot and far more sales per employee. Costco workers average just under $17.00 per hour in base pay, nearly all work full-time and thus enjoy benefits such as medical plans and retirement funds. Costco is not as large as Sam's Club, but it generates roughly the same level of profit per store, and that makes them just as attractive to shareholders.

McDonald's has a dominant position in one market, where the stores have above-average sales and wages are equivalent to about $15.50 per hour. There's even plans to open more stores, despite having to pay over twice Our national minimum wage. Where is this magical place of Happy Happy Joy Joy Meals?

Stick that in your low-wage pouch and smoke it.

The largest segment of workers in Puerto Rico are in the "Services" category. Just drive around and you'll see why, with many of the cheapskate companies listed above joined by Walgreens, Pep Boys, Burger King, Auto Zone, Wendy's and Office Max along with local retail chains like Pitusa, Econo, Selectos and Me Salvé. All have the same marginal-wage structure, trying to cap employee hours at 35 per week and letting the welfare system fill the gaps. 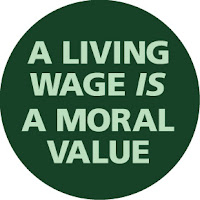 A friend of Mine, who has an MBA, lost her job when the multinational she worked for closed with barely 15 day's notice. She went to verify her unemployment benefits and to see if she could get a job through the government agency's resources. She was only offered jobs at Burger King. The pitch? "Take the job and we'll get you food stamps to help out."

Where Burger King and McDonald's and Wal-mart and Starbucks employees also qualify for food stamps.

You see the problem, right? "Blame it on the system," right?

But aren't We "the system"?  Damn right We are. So it's either fix it, destroy it or stay out of it altogether.

We can do all three, and We should. Solutions are out there, but like with ideas, it's making them happen, the execution, that makes the difference.

Let's explore that, shall We?


P.S. -- From today's Cleveland Plain Dealer website: A Wal-mart in Canton. Ohio is holding a Thanksgiving food drive "for their associates in need." Associates, what Wal-mart calls its employees, are in need? Of food? What the hell is Wal-mart paying them? Peanut shells? And how the hell does a company with a $17 billion annual profit have the totally unmitigated gall of asking its customers to directly help feed its employees? Is this the new image of America?


[Update: 20 Nov 2013: You vote more with your dollars than you do with your, uh, vote. Here's the explanation and how powerful it is, via Free From Broke.]

[Update: 21 Nov 2013: How Wal-mart Could Pay Workers a Decent Wage Without Raising Prices. From Mother Jones. The skinny? Take the money the company uses to buy back its stock, to enrich the Walton family, and put it into wages instead. And you thought I was just spewing gall about the $17 billion profit, of which $7.6 billion goes to buying back stock...

And from Bloomberg.com, How McDonald's and Wal-mart Became Welfare Queens. A few words, to sully the palate: "Wal-mart’s 'associates' are paid so little, according to Grayson, that they receive $1,000 on average in public assistance." That's over $1.4 billion a year that taxpayers shell out for "everyday low prices." Shit.

Speaking of which, from the good people that run the other welfare queen bitch: "McDonald's Tells Employees To Consider Returning Holiday Gifts To Get Out Of Debt."

[Update: 22 Nov 2013: Counterpoint, also from Bloomberg: Why Wal-mart Will Never Pay Like Costco. A quote: "Costco really is a store where affluent, high-socioeconomic status households occasionally buy huge quantities of goods on the cheap: That’s Costco's business strategy (which is why its stores are pretty much found in affluent near-in suburbs). Wal-Mart, however, is mostly a store where low-income people do their everyday shopping." The article makes, and supports, its valid points.]

Hi Gil, loving your initiative.
This case I was discussing with my ex yesterday.
My way of seeing it is avoiding the use of large retail chains such as the ones above and use local business whenever is possible. I try to teach my son the same.
I'd really start to see the independence movement seriously when large retail chains such as cheescake factory or krispy kreme start going out of business because El Meson, Panaderia Gloria or other local retailer has all the clients.
However, the local has to provide the service or the quality to justify the jump. If you sell junk I am not going to buy it, either local or foreign.
Ironically the conversation with the ex finished when she left to buy some groceries at Wal Mart instead of either the gas station or the dominican market next door.
I guess she has the pro statehood etched on her brain like the old atm machines that had screen burns for lack of a screen saver.

I don't mind if people shop around to save money. I do mind the automatic assumption that Wal-mart is good for Us because it's cheap. So is crack.

Every employee in these stores and companies that is earning less than a living wage so We can buy "5 for a dollar" is costing Us money in taxes, government services and unrealized potential. As I wrote in an e-mail just before replying here:

"The biggest economic boost in world history happened when a father could work one job, raise a family, buy a house, a car, and afford new things ever so often, and still have something left over for emergencies. Can ANY family of four do that now with just one average job? Can any couple do so, even without kids? Real wages have DROPPED since 1975, while corporate profits have nearly tripled, yet their taxation has been slashed almost 94%. There's your problem right there."

Yes, I want to save money, but the truth is, I'm not. Nor is your ex or anyone else who continues to think that "everyday low prices" at the expense of Our people is a good idea. We pay for it in the end. We have for decades, propping up companies that make more PROFIT in under one minute than you make all year.

Legislate a living wage so We can all benefit. And if fat-ass billionaires can't hack it, they can just shut down their companies and live off their substantial savings. Someone else will step up to fill the fetid gaps they leave behind.