(Some) Progress To Report

[Hey! Jenial Thanks to Ms. Mendes-Franco for picking up not one, but two Jenius posts, showcased on Global Voices Online.]

Progress Note One: Those of you who know My predilections know I am a diehard--possibly THE only diehard--Pittsburgh Pirate fan left outside of the Three Rivers area. The fanaticism (where do you think "fan" comes from?) stems from My childhood idolatry of Roberto Clemente. That does nothing, really, to explain sticking with the same team over a record-setting 18 consecutive years of losing records; My only defense is that I'm loyal to a freaking fault. But this year! The Pirates are currently 45-42, competing with the Brewers and Cardinals for the Central Division lead. How significant is this? It is the best performance by any Pirate team this "late" in the season...since 1992, the last year the Pirates had a winning (and playoff) year. Go Bucs! 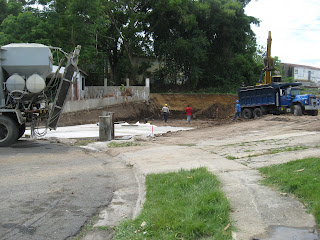 Progress Note Two: The picture reflects the current state of construction of My street's "drainage project," scheduled to have been completed in March of this year and actually started in April. How's that f0r government efficiency? In any case, contractors on the project tell Me it's about 15-20% completed and won't really be a functional canal until late August or early September. The irony? It could be delayed several weeks...if it rains. During the hurricane season. Which lasts until October.


Progress Note Three...maybe: According to something called the Urban Institute, each death in Our (the U.S. of part of A.'s) "costs" about $3.4 million. To put it another way, each of Us "provides" $3.4 million in value to society. So doing a quick calculation, Our 2010 murder toll of 1,046 dead "cost" Us roughly $3.56 BILLION.  By reducing that murder rate to what it was in "the good old days," when it hovered around 746, would give Us a "gain" of a little over $1 billion. When you consider that Puerto Rico's only abundant natural resource is people, what possible argument can there ever be against saving the lives endangered by Our own societal failures?

The Jenius Has Spoken.
Posted by GCSchmidt at 12:12 AM

Beat 'em, Bucs! I was living in Pittsburgh when they won the series in 1960 (Papi was stationed there), and have been a fan ever since. My nephew Erik, who paints as a hobby, recently captured Clemente's likeness in his work "San Clemente". Don't know if you can access a photo of the piece, since it's on his wife's FB:

Another Pirates Fan!! Hokey Smokes!! Happy to no longer feel alone! Wasn't able to see the painting ("Content unavailable" message) but I'd love to see it soemtime! Go Bucs!