Yeah, some people won, some people lost in yesterday's elections. Big boo-hoo either way because the system--like Our economy--is broke, so We end up picking dregs no matter who We choose.

The news aside from parasites was that in the two-tiered Yes/No """status""" plebiscite, the current status was "ejected" by 54% of the voters, leading to a second result where statehood was "selected" by 61.3% of those same voters. (Numbers still not official.)

Seeing as The Larva was fired and the statehood party was dumped from several major positions, their lame-brained focus will be on how statehood "won" the plebiscite. Two objections make this a """win""" rather than a "win", and in the Jenius' Thesaurus, based on hard-nosed objectivity, a """win""" is exactly a loss.

First objection: The numbers say statehood is a minority position. Do the math. No, really, do it. At the first level, Yes or No, the rejection of the current status gained 54% of the vote. A majority, indeed, but not a super-majority. From that 54%, some 61.3% chose statehood as their preferred new status. Woo. And hoo. What it really means is that 33.1% of Our voters support statehood: 54 x 61.3 = 33.1%.

There's no other way to look at it. Screw around all you like with that 61.3%, but that number won't fly: the number that will is 33%. Guaranteed.

Second objection: This plebiscite--like the others--was non-binding. Hey! Let's hold a beauty pageant and count the votes and then give no prizes! Yay! Only instead of a beauty pageant, We get a freak show that even P.T. Barnum would have blanched at selling more than once. In a desperate move to bolster his precarious position, The Larva came up with this scheme, hoping the statehood vote in the plebiscite would spill over to the general vote and give him four more years to (non)govern.

Didn't work. He was fired anyway and may have done more harm to the silly statehood whining than any of his predecessors. All in all, a very typical Larva sequence.

There are two more takeaways from this pathetic plebiscite that, in fact, carry more weight, but are bound to get short shrift:

1) The "commonwealth myth" is dead. The idea, the very very stupid idea, that Our current status is "dignified" and "worthy" is dead. It was fatally wounded in the 1980s and lingered like a brainless cockroach until yesterday, when the open rejection of it was made manifest. We are a colony, plain and simple, and the commonwealth status We have makes Us so. To state otherwise is to be dumber than flat-earthers who believe in creationism... and there's already way too many of those idiots around. 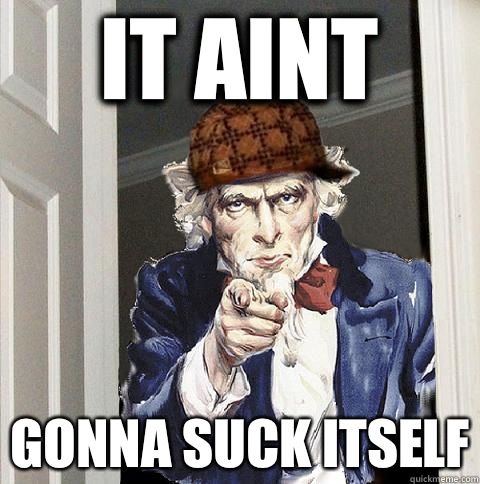 2) When it comes to independence, We are tit-sucking toddlers. I used to say We were teenagers, but the fact is that Our reaction to standing on Our own two feet and tackling the world on Our terms is exactly that of terrified toddlers who haven't learned to walk and are still sucking tit. Only Uncle Sam's tits don't give milk, so I can tell you exactly what body part of Uncle Sam's body We suck to make him and Us happy.

That's why the 33.1% """statehood support""" number equals nothing. We still suck Uncle Sam's co--congressional funding, incapable of believing in Ourselves, unable to muster the integrity to stand up to him and say "Screw you, I'm doing this My way," oblivious to the 114-year-and-counting message of "We don't want you" and playing little plebiscite games to amuse the masses while the parasites suck Us dry.

It may be "Our national sport," but We suck at politics because We suck at being adults in politics. At its most base, at its worst, politics is about greed and power-mongering. That's where We live, like pigs in shit. The highest level in politics is nation-building, the forging of a stronger future for almost everyone. We simply never get there. Never have, and based on the miserable moronic plebiscite vote, We never will.

Bring on Larva Lite and his parasites. The loathsome cycle of Our national Special Olympics for scared babies is about to begin again.


[Update: 8 Nov 2012: From ABC News, a clear-eyed look at the blatant lie that is "statehood won", as propagated by Liars Central, a.k.a., the statehood party. And for a revealing discussion that (a) predicted this report and (b) reveals how My post and its reactions gave context to My writing and the plebiscite's results, check out the Comments section. Yeah, We're on it.]

[Update: 16 Nov 2012: Three more analyses, one of which, surprisingly, barely even bothers to look at the issue. The superficial one is from the otherwise reliable Economist. A deep dissection smack-down of the numbers comes from the Movimiento Independentista Nacional Hostosiano (better English users than the statehood party...by far) and the third from ProEnglish, calling the vote "rigged." Discuss amongst yourselves.]

Looking at the actual numbers on the ceepur.org not sure your 31% figure is correct

802,179 voted for Statehood which = 46% which is a little higher than 31% - still not a majority granted but higher than the other options

Thanks for commenting, Brian.

Under "Non-Territory Options," which includes statehood, independence and "sovereign commonwealth," statehood had received 61.15% of the "No" vote. I had a 61.3% figure from earlier in the day, so this result actually drops Us into almost exactly 33%, not 33.1%.

My reasoning and numbers stand. The "Yes" vote represents not only an acceptance of the colonial status, but obviously a rejection of statehood. And of the "Yes" vote, over 38% of those voters rejected statehood. The ONLY vote count for statehood is the "Yes"/statehood herd, defined by (53.99% X 61.15% = 33.01%) of all votes cast.

I should add a zero to My post title, really...

And the absolute number of ANY option (Yes/No and Non-Territorial) is further reduced by the number of blank ballots, which at 12:27 PM stood at 468,478. With 1,311,727 ballots cast, 468,478 blank represent 26.3% of the total voter group who didn't care or actively chose to not vote in this plebiscite. Their blank ballots can be seen as indifference, rejection or cynicism, but they must be factored in when weighing further decisions based on any result.

I did an analysis earlier today with CEEPUR data. STOP! Hammertime:

But we are analyzing too much on this customer satisfaction survey.

Another plebiscite laid to be forgotten...

The comments above are right.

The number of votes in the Yes/No question are the same as the ones in the Statehood/ELA Soberano/Blank/Independence one.

Blank voting here means that none of the 3 options in the 2nd question were voted, meaning support for the normal ELA.

This was done for the sole reason of dragging people to vote for the Larva. People in the mainland won't be fooled by this charade. Intelligent people in Puerto Rico will diss this as well, but then the larva's acolytes and those who will welcome el Mesías 2.0 who'll sacrifice his research job for us (wink!) need something to hang on to. They'll remind us the next 4 years, completely ignoring what your previous entry states. The show must go on.

David, thanks. It does seem evident that the plebiscite was meant to "buy" votes for The Larva and just as evident that, once again, statehood failed to make any sort of relevant case that could come close to convincing Congress that We want it.

The plebiscite is an exercise in futility. We will be a colony until Uncle Sam can't exploit our resources anymore, they will then pack their bags and sayonara. I am sure by then we will be sending a delegation to China or another country where we can continue our "mantengo" lifestyle.

blank votes can't be counted. That is ridiculous.

Kofla, A+ again to you. And Anonymous, blank votes shouldn;t count, but "half-blank" votes should.

Apropos of My post, We're now starting to see national media focus on the "Puerto Rico requests statehood" issue (not because of Me, I assure you). Some outlets are following the local lie machine (60+% for statehood bullshit) while the more sober, smarter crowd is weighing the numbers properly (statehood getting about 45% of the vote.)

I've even seen a tweet about "demanding change now" by petitioning Congress to consider statehood for Puerto Rico. Puh. Leez. Congress would rather consider forced coffee enemas. As I tweeted in reply: "114 years and counting..."

Blank votes =/= secret votes for whatever position you like. In most democratic countries, not voting means you don't count. Not here, though. Puerto Rico lo hace mejor!

Anonymous. Blanks count when they are significant quantities. Retraimiento is a legitimate strategy used in spain or in argentina. Wasnt none of the above the pre vious victor?
In short pnp strategies was to get the no plus get the 'majority' of the three options since he knee blanks and soberanos would split.
Then go and say we were ratified twice. Dont mind the maggots for you see...blanks dont count...
Ratified indeed...ratified indeed...by the rats rotting ferre's legacy.