Having had My head all up in horse's asses masquerading as medical school administration and accreditation officials, I find Myself in the need of catching up on certain topics that whiffed by as SJBullshitters and LCMEBackstabbers played shitball with some Our medical students.

And yes, My vocabulary has gone to potty over the past two weeks.

Item The First: Over 200,000 of My Brethren are fraudulently receiving free phone service. I think I'm in the majority of My People when, upon reading that headline, I thought: Only 200,000? The subsidy, obviously meant for the very poor and the elderly who live on a meager fixed income, became a boondoggle for morally-inept intermediaries and bare-faced liars. (And there I go again, talking about the SJBullshitters and the LCMEBackstabbers! Damn My multi-laned super-expressway no-speed-limit mind!)

There will be, of course, an investigation, and We can expect that, oh, about 20,000 of those riding the airwaves free will be dropped from the list. But the pattern that emerges is: Something "free" offered, it gains traction, attracts "players" who become "agents" extending the "free," greedy bastards get into the "free," there's a "discovery," fru-fru ado, a few greedy bastards get dropped and the scheme gets more lucrative for the "player-agents." Watch the pattern emerge, if you can stomach it.

Item The Second: From the venerably-senile Washington Post comes the news that "hundreds of non-native monkeys" have been eliminated in southwest Puerto Rico. Okay, good start. First because it's about non-native monkeys, seeing as how Our only native monkeys are in government and media, with a small sickly tribe of them trying to run a medical school under the bossiness of a non-native addled ape. Second, it's about My part of the Island. And third, because it highlights the serious danger these monkeys pose to Our local economy and health. And for those with brain PETAchiae, shut up. Yes, the monkeys didn't ask to be brought here, but unless you're willing to pay to have them all captured and sent back "home," shut up. The sooner We eliminate all the monkeys, the better. And the non-native ones, as well.

Item The Third: From the venerably-senescent New York Times comes the "news" that the GasoDildo has plenty of critics. Really. It actually does, from the home-owners who are about to get raped in the expropriation process to the environmentalists who rightly point out that a 93-mile gas pipeline is fucking ridiculous and dangerous to the Army Corps of Engineers who keep saying "No, you can't build the GasoDildo any way you want, you have to actually build the damn thing." The subtext: No, you can't simply take the money and run, you have to actually make an effort to steal it.

Will the GasoDildo save Us money on Our electrical bills? Probably. Our electrical bills will most likely go down, seeing as how they are artificially-inflated right now. But there's costs and then there's costs: what the GasoDildo represents is a huge widespread cost to Our economy, integrity and well-being versus a tiny individual cost reduction. To be blunt: do you want Us all screwed for a "savings" of a few dollars a month? I certainly don't know about you, but I'm not a whore...much less a cheap one.

Item The Fourth:  U.S. of part of A. Education Arne Duncan was here, eyeing the macabre state of (mis)education We have. Pretty much coinciding with his visit, We all learned that the local Education Secretary was stealing electricity, the same charge (pun intended) that cost the Executive Director of the Power Authority his job. Yes, government """"leaders"""" stealing electricity, which means We ol' common folk have to pay more, thus KY Jellying the way to a GasoDildo gang-rape/brazen theft, which in terms of getting screwed by hypocrites and liars does have some parallels with the SJBullshitters and the LCMEBackstabbers.

Where the hell was I? Oh. Arne Duncan. Comes down here and prosletizes that We must "de-politicize" Our education department. Really. He is absolutely right, for We have had it (or should have had it) with a system that changes direction every time it changes color, with one party eliminating what the previous party did because it was there and jamming the whole latrine with even more turds.

Duncan represents the epitome of politization of education. Education in the U.S. of part of A. system is a State responsibility, and since the 1980s, the Federal government has been encroaching and invading that responsibility, using money to literally buy into, if not outright bribe, state education systems. No Child Left Behind has been a disaster, seeking to impose one standard across all states, in exchange for billions of dollars. 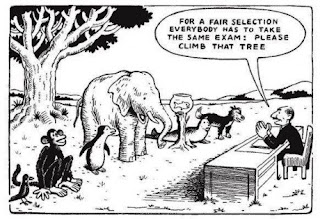 And what "state" has the largest dependence on federal education funds? Puerto Rico.

Duncan, before you waft mouth-farts as if your soapbox placed you on high, shut the fuck up and actually dismantle the problem first. Yes, We have a problem and We've had it since 1968, but you came here to preserve the status quo, not change it. That makes you part of the problem.


Item The Fifth: Virgin Airlines, Richard Branson's corporate crown jewel, was born in Puerto Rico. Go ahead, read about it, and note the implied lessons for Us: (1) Rather than bitch and moan about his ploght, he took direct, practical action in an imaginative way; (2) He had the resources to do so, but if not, he would have negotiated and sold his way to them and (3) He created an offer that was fair and still led to profit.

Imagination, thinking big rather than small, looking beyond himself and his id, hard work, seizing an opportunity creatively rather than greedily, believing in himself... Richard Branson is a rare individual, not because of his character, but because he has used his character to make big things happen. But make no mistake: character comes first.

In Puerto Rico, We act like success creates character. We have got it so wrong.


[Update: 26 October 2011: "Hidden" expropriations and lies going on with the GasoDildo in Utuado. Who do We have to shoot?]
Posted by GCSchmidt at 1:12 PM