Ramphis Castro, a computer engineer in his non-secret identity, is a key member of the TEDx San Juan  event group. Through him, I learned about the effort to do a TEDx conference on the Island and We talked about that, as well as the entrepreneurial environment of Our Island.

For the TEDx San Juan team, the goals for the event were to reveal the people who were doing noteworthy projects, get them and the invited audience to meet and hopefully establish new collaborations. In those respects, Ramphis feels that the event was truly a major success. However, getting there was not so easy.

The search for sponsorships to secure funding for the event started with, reasonably, major companies. What the TEDx San Juan group discovered was that these big corporations didn't really understand the TED concept and were more concerned with the group's "track record" than anything else. Their general take was "Have the event and if it succeeds, then We'll be interested." In addition, there was a sense that these "established entities"--maybe We can call them the "Establishment"--were less-than-keen to support an event that didn't fit their limited "box" of ideas or didn't seem to directly support their "agenda." 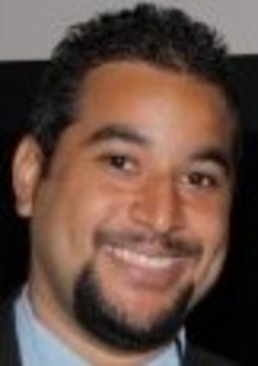 The cold-calling slog at that level was quickly replaced with a new strategy: approaching small businesses and non-profits. The amount of money needed to hold the event was not that much; as Ramphis pointed out, many of the large companies spent many times the TEDx San Juan budget on crap (My word). It wasn't like TEDx was a "break the bank" (pun intended) risk.

[Aside: I've decided not to mention the companies Ramphis and I talked about, not because they deserve anonymity--they don't--but because TEDx San Juan is about synergy and collaboration: dissing anybody at this early stage amounts to closing doors needlessly. But you can call Me to ask who We talked about.]

What was slow bureaucratic protocol based on "Who are you?" and "Why do you want to do this event?" in the Establishment was replaced by quick acceptance and support from small companies and non-profits, who didn't care that Ramphis, Marcos Polanco and the rest of the TEDx team had never done this event before, or that the event had a global focus rather than a local one: what mattered to them was that it was a potential lever for change.

Ramphis discussed how what the Establishment has is power, and though they could make great changes with that power, their focus above all is self-preservation; the status quo must be defended. For the rest of us, isolated from the progress We should be able to achieve because those with the responsibility of helping changes emerge refuse to "open certain doors," shredding the status quo is a good thing.  As Ramphis pointed out, We search for options for progress, and in the TEDx case, the smaller companies are not only more nimble to react, they are more willing to embrace change. And they did, usually with one just call.

TEDx San Juan hit the local scene like a flash-bomb of creativity and passion. Ramphis noted that the most important results would be seen post-event, as the ideas and collaborations start spreading their influences. He replied to My observation about the "high energy" at the event with, "It was one thing to anticipate it, because We did, but it was another to actually see it."

Switching gears, I asked Ramphis for his overview of the entrepreneurial environment here. His first observation was that although We do have an entrepreneurial streak in Our culture, most of Our entrepreneurs are "accidental," i.e., folks who've lost their jobs and are forced to start a business to secure income. In Ramphis' view, We aren't taught how to be entrepreneurs and the resources at hand are not truly geared to helping a business get off the ground. For one, there's protectionism by larger established companies, limited financial supports and though there has been some reduction in government red tape, there's still an often-bewildering array of steps to complete to just start a business. Faced with that panorama, Ramphis says, many of Us just "give up and sit in a corner to cry."

But Ramphis goes on to say that "Everywhere is hostile to entrepreneurs." Starting a business is not easy and that's simply a fact. Those who succeed don't care that it's difficult because their focus is on change. In Our case, Our reliance on "the government" is a barrier because, Ramphis notes, they don't know how to change the system to create an environment of true economic progress. For example, the government looks to big companies to increase jobs, but 2/3 of new jobs are created by start-ups and new companies. If a big company does add 400-500 jobs, it's because they cut 2,000 jobs someplace else, and the same can and does happen to Us when We're (increasingly) on the losing end.

Once again, the Establishment serves more as obstacle than as facilitator, self-preservation trumping "a rising tide to lift all boats," for fear of sinking the ship. But Ramphis notes that entrepreneurialism is not a "magic bullet": it will not "cure" an economy nor is it to be some isolated tool for economic progress. It has to be coordinated with other changes to create a support system that helps create more opportunities across the board, rather than just for new companies.

To Ramphis, the biggest change for economic progress is the Internet because it drastically lowers entry barriers for nearly all businesses. However, by itself, it doesn't change the need for financial support or the reliance on knowledge, specifically education on being an entrepreneur, a subject Our school system doesn't even glance at. And yet, for knowledge, the Internet is its own solution, and thus there's no excuse for anyone to say they can't learn about a product, service, market or industry: it's within keyboard reach.

However, to sell to foreign markets, Ramphis acknowledges We have an "island mentality" that doesn't look outward very often, but he points out that face-to-face, feet-on-the-ground contact is still a key component to secure sales. He notes that local entrepreneurs are missing the point with a strictly-local focus, or a vaguely "global" one, when he points out that We have 4.7 million of Our Brethren populating the States, more than doubling Our Island population. Selling and marketing to them is as easy as being Ourselves with people like Us who want to support Puerto Rico. Ignoring that market is short-sighted and the sooner companies realize that, the better.

As Ramphis discussed, being an entrepreneur is not about just creating companies, it's about creating wealth. Not in the sense of "I'm going to be rich!", but in the sense of creating an ecosystem of value that benefits more than a handful of people. The lack of vision about this key point is seen in that the only major local "offering" for venture capital funding is basically a business plan competition, where a "home run with one swing" mentality is backed by a limp-wristed $5,000 "pledge" based on a document and process that are largely irrelevant to cutting-edge start-ups. Yes, planning is important, but planning for a year is much less a wealth creator than actually doing the business for most of that year. That myopia is not enough for a powerful vision of progress and never will be.

To My remark about the underground economy flourishing as evidenced by the huge expansion of (permanent) flea markets, Ramphis feels that more than anything else, this is a symptom reflecting the failure of public economic policy, which is lost and confused. What this underground economy does is serve as a "safety net" for those who are left out of the economic loop, but it also traps them there, unable to grow. Few start-ups in Puerto Rico grow to be big, but the flea market environment won't change that reality. What Ramphis does see is that start-up processes at this level are lightning-quick, with clear and simple procedures. Although a government has to be aware of more details, it also has more resources to do so, so streamlining red tape and simplifying procedures should be a true economic boost, as has been shown several hundred times around the world.

A deeper look at economic progress and synergy can also be seen in Ramphis' work with Startups of Puerto Rico, a tech-centric push for entrepreneurial development on Our Island. The goal is to create the environment that start-ups can thrive in. In a nod at the Establishment, Startups of Puerto Rico has a focus where older companies help the newer ones make progress. Although the focus is tech-centric, agility is also a vital trait, so non-tech companies with emerging or created markets can also benefit from the group's expertise.

As for TEDx San Juan, the tentative date for 2012 is December 14. Ramphis indicated that the entire group was not only revved up for this year, but also to support any and all TED-type events that might be held locally. The support gos beyond logistical to include sponsorships, so that the synergy and collaboration can spread even wider.

On a closing note, Ramphis and I agreed to collaborate on highlighting noteworthy projects that barely missed the cut for TEDx San Juan and within Startups of Puerto Rico. Synergy and collaboration.

It's so good to be back in that flow.

The Jenius Has Spoken.
Posted by GCSchmidt at 8:12 AM