Life, Liberty and the Persecution of Gayness

Gay people should not be allowed to marry.

That's the current stance many religious and civic groups are taking in Puerto Rico, and the notion is fast becoming a plank in the statehood party's rotten platform. What elevates this from personal opinion expressed too loudly to sociopolitical discussion is that the movement now is to amend Our Constitution so that marriage is defined as being solely between a man and a woman.

I have expressed in another forum what I'm going to say here: In a society where half the marriages end in divorce and where roughly 35% of Our children are raised by single parents, the problem is not gay marriage. That's nothing but a cheap distraction because focusing on that is to focus on folding deck chairs while the cruise ship is sinking.

The knee-jerk reaction to gays in general is not about marriage, but abut sex. Gay sex bothers people. Well, as the comedian said, if that's the problem, then let them get married and there will be much less gay sex.

The problem with trying to make marriage a "Constitutional imperative" is that it takes a private matter--sexual orientation--and makes it a public "flaw." Let's replace the word "gays" with "blacks" and see if "Only non-blacks can legally wed" makes sense to you. (If it does, you are too stupid to live.) Or change the racially-charged "blacks" and use "redheads." Doesn't make sense either. You cannot legislate against what an individual has no control over (sexual orientation skin color, hair color, birth defects, parents, etc.) and to single out one group is to ultimately endanger all groups.

Ah, but some of you are thinking that gays have a choice about being gay, that they choose their lifestyle and thus can be "legislated out of their rights." Wrong again. First of all, most gays are born as such and even if a substantial minority choose that lifestyle, why should you care? Stick to your life and leave others to theirs. The Constitution allows for "the pursuit of happiness," not persecution of gay(s).

Second, sexual orientaton is a private matter. Unless you buy into fascist idiocies, a person's private life, insofar as it doesn't harm anyone else, is theirs to live freely. If a person thus chooses to love another--of the same sex or opposite--and that person loves back, why shouldn't they be allowed to formalize their relationship? Is love so frightening?

Oh, you want to pull the "procreation" argument. Puh. Leez. "Go forth and multiply" is a great slogan back in the day when your best bet to beat your enemies was to outscrew them for a couple of generations. Nowadays We don't need more people to outnumber Our foes and We have adapted to the times and changing environment by having smaller families or even not having them. So having babies is not a law: It's a passé strategy. And if you look closely, notice how many of the kids We are having are growing up lacking a parent and sometimes two.

And finally, to amend a Constitution for the first time should be because of a truly vital social, economic or political need, not a hissy-fit by cross-eyed zealots. In fact, We do have a vital issue already in place, one with a deeply important social, political and yes, economical angle: Unicamerality. Already voted upon. Already mandated. Why not focus on that, you statehood platformers?

Paraphrasing another comedian: Gay people should allowed to marry...so they can be as miserable as the rest of Us. 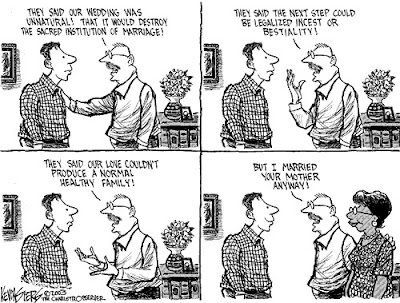 Posted by GCSchmidt at 1:12 PM