One of My first posts to gain traction, as they say, was one where I incisively accuse My Brethren of falling all over themselves to become debt slaves, pursuing consumerism to the point of losing any chance at growth, prosperity and even happiness.

A gentleman in South Africa picked up on the title, I suppose, and accused Me of being over-dramatic. I excused his ignorance, since I am fully aware that for Me to consider a remark about his South Africa as "over-dramatic" I would have to actually know something about South Africa beyond "where it is, Nelson Mandela, Desmond Tutu, the Boer War, diamond mines and apartheid." I gather the gentleman from South Africa can't locate Us on a map, can't name two of Our leaders (and for you partisan pukes, governors and head beggars in D.C. don't count...ever) and can't name any of Our resources or major concerns. So there.

But look at this nifty quote worthy of reflection even if it is smeared on a redneck billboard: 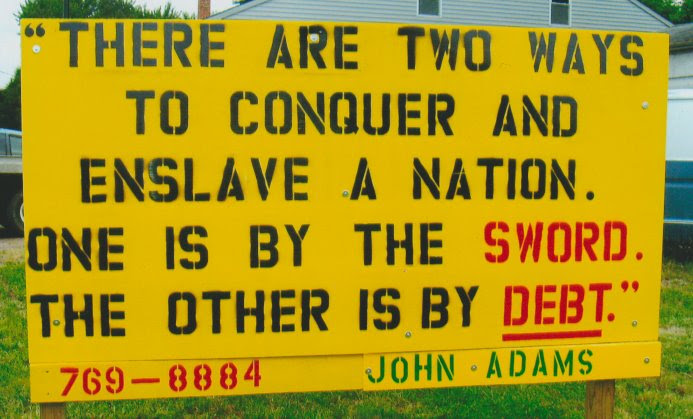 Tell Me, Brethren O'Mine, that this doesn't make a ton of freaking sense in describing what has happened on Our little patch o'green since 1898. (Yeah, I'm going there...and more.) In fact, it's been happening since 1508. (See?)

Try--try, I ask you--to think back to the pathetic, nauseating, fecal-brained excuse for History of Puerto Rico classes We were subjected to over the years. You know, the ones where We went from Christopher Columbus (a guy many teachers implied was Spanish rather than Italian) "discovering" Us in his second voyage (ignoring the dramas and background of his other 3 voyages) and Ponce De León becoming Our first governor, then leaving to die in Florida (the only smart exit We've ever had at that position), to dead Taínos and the 19th century, then 1898, and zoom! The "American" years, blahblahblah. You know, the (Offthe)Cliff Notes version, sans any sense of culture.

Maybe there was a 10-minute segment somewhere, once in grade 4 or 7 or 11 when a teacher would yak about jornaleros, the practice of giving workers little booklets to keep track of their work. Without a jornal, you could be arrested for vagrancy, treated as a non-entity, so getting a jornal was key to making it in Our society. So of course, the system was abused.

One of the many abuses was the eventual development of vales, payment in scrip that wasn't real money anywhere except at the stores the jornalero selected, usually his own. Of course, the prices in these stores were high and thus the poor obrero was stuck having to go into debt to cover the needs of himself and his family, a condition exacerbated by the fact that without his jornal, he couldn't find a job elsewhere.

Debt slavery in its nascent form.

Let's imitate the lousy History of Puerto Rico crap We've been force-fed and skip to 1898, the Year the U.S. of part of A. treated Us like war booty then got all nasty on Our asses. Huge plantations went up, sugar cane as King of Crops, with workers doing six months of work and then being laid off for six months. No jornales, but every big Americuchin plantation had one thing: a big-ass general store. And if you worked for that company, you were expected--very much expected--to buy at that store.

Some of these haciendas even had their form of vales, though they didn't call them that...of course. But the function of the store and work system was the same: create debt to control the worker.

Now those were the bad old days, when Puerto Rico was under-funded and lacked a general infrastructure for growth. Now We are over-funded (We are; topic to revisit another day) and We have a general infrastructure for--cough cough--growth. And yet, look around, Brethren: how many of you and the people you know are on a treadmill of "I have to keep this job because I have debts to pay?"

Now remember, please, that less than half of Our adults are in the workforce. So half of Our "labor force" is pretty much dead weight for whom debt slavery would be a step up. Of the other half, how many are in debt slavery? 10%? 30% 50%?

I'm estimating that close to 80% of Our workforce--small as it is--is in debt slavery. I'm basing it on two simple principals: observation  and the Pareto Rule. Yes, I'm saying that 80% of Our working folks are debt slaves. Want additional proof? Check out Our use of credit and shopping habits: they're not all driven by "welfare-dependent non-producers."

Wrapping up, are We enslaved? Hell, yeah. But back to the premise of My original post, now We are choosing the enslavement, rather than knuckling to overwhelming pressure.

In a time when the power of the individual is at its highest (in Our part of the World), the capacity to see and use that knowledge must be developed, and the basis for it is to ground the individual in a culture and society where making one's own choices are more important than ignorance and following the crowd.

Yeah, I know. There's a first time for everything, eh, Brethren?

Gotta confess. I've been enslaved too. But I'm slowly and steadily escaping my masters one payment at a time.

Another angle and interesting discussion. The unofficial history is very interesting indeed. I always considered the excessive welfare of our island as a codepency creation machine. Welfare as being better off than hard honest work. Why fight if i have all paid by the americans...