On the heels of My last post (just below this one, for you blog noobs or Fools) (Parenthetical interjection here: In Jenius-speak, "Fools" are so-called government, business, corporate """leaders""" that almost invariably couldn't find their rectums with a mobile app/GPS combo shoved into it. Yes, that's graphic. They are that revolting. And the excessive quotation marks are My version of rampant sarcasm. Maybe I should write a glossary...) I'm continuing My line of "exploring Puerto Rico."

Here's an example, right from My Life: I have a dear friend, Jenius Supporter Extraordinaire, who just won a 2-year Education Master's Degree scholarship at the University of Helsinki. He's one of 20 students from around the world who made the cut. And why is he doing this? Because Finland has one of the great success stories in public education over the past 25 years.

And My friend, Alfredo, lives to change Our education system.

Now I happen to know Alfredo since 1998. He's the first person I made friends with when I moved to Cabo Rojo. He even introduced Me to My Wife, Mrs. Jenius, so if Alfredo ever needs two kidneys, he can have both of Mine. Alfredo and I have discussed education and 1,492 other topics at great length, which means I'm as proud as hell he's going to Finland to learn new ideas and teach them about Us.

Because that's the other part of this deal: Alfredo will teach the Finns about Puerto Rico. Now the general reaction of My Brethren to this statement is 23.6% "But they already know about Us!" and 74.8% "Why would they want to learn about Us?" Brethren, you know in your hearts that I'm right about this, down to the ratio.

(You math whizzes can now get the missing portion: 1.6% will think "They won't care at all." You know I'm right about that as well.)

First of all, just because We're practically blind to the larger world outside of Disney/Orlando, Miami and the Bronx doesn't mean the rest of the world is like that. Second, Alfredo was selected--I believe--because he was as well-qualified as the other candidates, but also because he's from Puerto Rico. How many other Puerto Ricans do you think have ever applied to the University of Helsinki? Third, the Finns travel the world sharing their education success story; I even blogged about it. Twice. As smart educators, they know that learning is enhanced by diversity, and adding Puerto Rico to their mix, for what has to be the first time, increases learning for everybody. And fourth, it is an education axiom that "One learns best when teaching." For Alfredo to reach his maximum potential as an educator, he has to be an active teacher/learner...and the best teachers are invariably active learners.

It's human nature to project one's own feelings and perceptions on others. To think that Finland, or any other country, would not be interested in Puerto Rico is to project Our insecurity and lack of strong national identity. (Alfredo has lots to say about that. We need to hear it.) We swing wildly from "¡Yo Soy Boricua!" jingoism to "What We have is peanuts compared to the U.S. of part of A.," often substituting "crap" where peanuts should be. And again, you know I'm right about this. The proof: Any visit to a local zoo, park or entertainment center invariably gets compared to some mega-facility up north. The clear sub-text: What We have ain't good enough. The sub-text should be: What We have is as unique as what they have.

We can all be great teachers, as well.


The Jenius Has Spoken.
Posted by GCSchmidt at 2:12 AM 7 comments:

Over the hiatus, I gathered some 74 posts of Mine into an e-book, that will be out before the end of May. Rather than meander on My favorite topics (Me and My writings), I'll just to get to the points:

1) The tone running through many of the posts was one of anger. You knew that. I knew that. But it's one thing to "know" it in a vague, "Uh-huh, that's true" way and another to see it flashing before your eyes in rapid sequences of 10-12 posts at a time.  You'll see it, too, when you read the book. Because you are reading the book,  n'est-ce pas?

2) But the tone was not anger alone: it was anger and pain, which equals outrage.  You know the difference between anger/rage and anger/outrage: one is a scream that rises in pitch, tone and intended violence, while the other screams, then modulates its tone to explain its pain. From this balance comes the frequent comment that "The Jenius does love His Island." That is accurate, as is My consistent disappointment and frustration with so many aspects of it.

3) The final point, an undercurrent through the 74 posts: I got tired of the outrage and wanted to find a new way. Even when expressed cogently, a constant stream of outrage can only descend into whining. I don't whine, don't want to. And for those of you who have lived with anger issues for years know, anger is draining. Downright exhausting. So a change was needed, for The Jenius' sake and for My own.

So what I feel I've done is open My eyes a little wider, to broaden the scope of My attention from largely looking at the next target I'm going to shoot verbal bullets at and refocus on the people and things that make Me love Puerto Rico.

And that's where you come in: I don't know all the people and things that make My Island--Our Island--so wonderful and unique. I need you tell Me, to point out who's doing great work unsung, who's traveling their own fascinating road and what's happening that could make a profound difference for Us if We only knew more about it. In other words, help Me open My eyes even wider.

If you've listened to the podcast, Gil The Jenius Now, with Susana Cabán, you'll get a hint of what I'm looking for. If you haven't listened to it, give yourself 16 minutes to do so. You'll see what I mean, and hopefully, you'll be able to lend Me a hand or two in the effort.

And what is that effort? To explore the good in Us, on and about Our Island, that keeps Me and so many of Us in "outrage" instead of "rage."

A tad convoluted, but I gather almost all of you know what I mean. Capisce?


The Jenius Has Spoken.
Posted by GCSchmidt at 1:12 AM No comments:

The Jenius Is Back

It was bound to happen...

After 155 days away from this little corner of heaven, The Jenius returns.

I know, you missed Me. I missed Me, too.

However, this is not the same Jenius that stepped away for a spell. First of all, I am now married, in such joyous fashion that many of Our (Mr. & Mrs. Jenius') friends still talk about the wedding. And second, in many ways thanks to the first, it's a new Jenius, one more like the ole Jenius, who could see more good than bad and enjoy it as much as the bad frosted His perineum. In other words, a kinder, gentler Jenius.

And you can see, the look is different, from surroundings to--gasp!--images and even a--gasp! gasp!--podcast. I can see you trembling with eagerness. Settle down a bit...

Pause a moment and take a look at this: 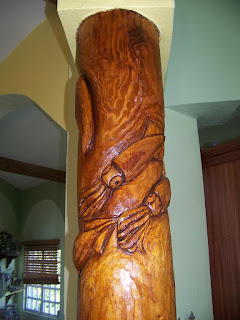 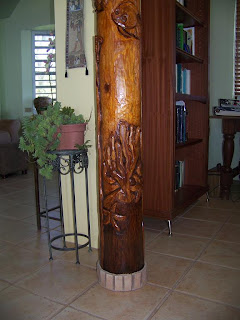 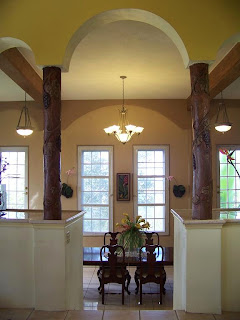 The pictures show only a sample of the amazing woodcarvings of Susana Cabán, a recent (last five years) arriver on My Island. Her blog has many more images, as well as samples of her other equally-beautiful work. If you'd like to buy some of her jewelry or woodcarvings, try her Etsy store. (I get no commission, so buy lots!) And to see her work in person (if you're in Puerto Rico), drop by the Tres Puertas Gallery in the beautiful Surfing Capital of the World, Rincón. Here's a slideshow to clue you in on what you're missing...

Then there's this: Gil The Jenius now has a podcast, called (I already said it)... Gil The Jenius Now. The first podcast (15:43 in length) features Susana, recorded on the balcony of the lovely home you see in these images. Gil The Jenius Now 001 is available here. (Right click and "Save" to download; otherwise, you'll hear it seconds after you click. So click. Now.)

There you have it: The Jenius Is Back. Or as He usually ends these posts...


The Jenius Has Spoken.
Posted by GCSchmidt at 12:12 AM 3 comments: