The Thieves Want No Supervision

I am disgusted by and with My Island. The word "rap" applies to what's happening.

The so-called Office of Governmental Ethics wants to rape Us about the following ethical procedures:

1) They want to eliminate he filing of financial statements by public officers and employees of the executive branch, and as amended. Who does this include? From page 3 of the first linked document: the governor, cabinet members, mayors, agency directors, presidents of public corporations, OR ANYONE ELSE AS SUGGESTED BY AN AGENCY DIRECTOR.

They even want to repeal electronic filing of financial statements, so it's not that they're concerned about trees.

Interpretation: The thieves don't want a paper or electronic trail of their looting. Period. 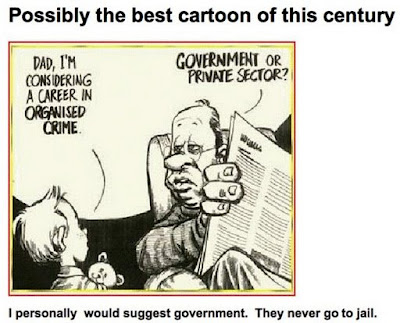 2) They want to eliminate the limitations regarding contractor dealings with public officials in terms of activities that breach current ethical standards, and its amendments. They even want to eliminate checking with the Ethics Office for procedural clarifications.

Interpretation: The thieves want bribery and corruption to become the default standard for granting contracts.

3) They want to eliminate getting dispensations to hire former """public servants""", and to eliminate the prohibition of using political party emblems in government activities.

Interpretation: The thieves want to keep the ol' gang together wherever they go and your voting booth will be painted blue and white while covered in statehood insignias.

4) They want to eliminate the restrictions on appointing, promoting or hiring relatives to government positions.

Interpretation: Like incest, nepotism is kept in the family...of thieves.

Interpretation: The thieves are raping Us. Again.


Let Me state this clearly: We either wipe out these vermin with votes, or We use bullets. Or...We let these thieves take whatever isn't nailed down, including Our dignity.

I won't be surprised if they get away with it. A prison sentence for these crooks will be too lenient for them. To set an example, pain need to be inflicted using the Wheel Torture, then they need to be burned at the stake.
http://www.koflaolivieri.com/blog/2012/02/we-petition-the-obama-administration-to-appoint-a-special-prosecutor-to-investigate-widespread-corru.html