On Sunday, My Brethren will vote on whether the current bail system should be reformed. The current system--under Constitutional protection--grants bail to every accused person, regardless of what crime they have been charged with. The suggested reform would eliminate bail on certain charges and leave it to a judge to determine whether bail should be allowed in other cases.

(There's another referendum vote going on this Sunday as well, concerning the swampy cesspool of shitheads We call the legislature. Since that vote will be non-binding, it's merely a political hack's desperate attempt to curry favor with My Brethren, and by political hack I mean the (non)governor, Luis "The Larva" Fortuño...long may he slime.)

And no, My argument is not specious. Just because something is "done in the U.S. of part of A." doesn't make it automatically the standard. In this case--as in many others--it specifically makes it "the standard We should avoid." Simple reason: the U.S. of part of A. has the largest prison population in the world AND the highest per capita of its population in prison.

Nifty, huh? World leader and all that shit!

If it is a judicial system and the results are the largest prison population in history, what does it say about the society that harbors and uses it? Conclusion: that the society cares nothing about justice and cares only about punishment. That means it is a despotic society seeking to impose dominance on certain elements within it. Therefore, what the U.S of part of A. has is not a judicial system: it has a dominance system.

And the evidence bears this out. Clearly and unequivocally.

Blacks and Hispanics are far more likely to end up in jail than Whites, despite the fact that the overall crime rate amongst races in the U.S. of part of A. is similar...and has been for several decades.

Here are some numbers:

--Blacks: including Hispanic Blacks, 13.6% of the national population; 39.4% of the prison population.

--Arrests: According to a Department of Justice statistics report (later removed), "...77.2 percent of all persons arrested were White or Hispanic, 20.3 percent of people arrested for offending were Black or Black and Hispanic; and the remaining 2.4 percent were of other races."

So, in terms of arrests: 77.2% are White/Hispanic, with 20.3% being Black/Hispanic. The estimated percentage of Whites arrested on all charges is 53.4%, and although Hispanics and Blacks only make up 29.9% of the total population, they account for 61% of the total prison population.

Whites make up about 53.4% of all arrests, yet make up less than 34% of the prison population. (Other races are arrested/incarcerated, too.)

How is this disparity achieved? By converting the judicial system into a dominance system. It begins with bail and ends with sentencing. 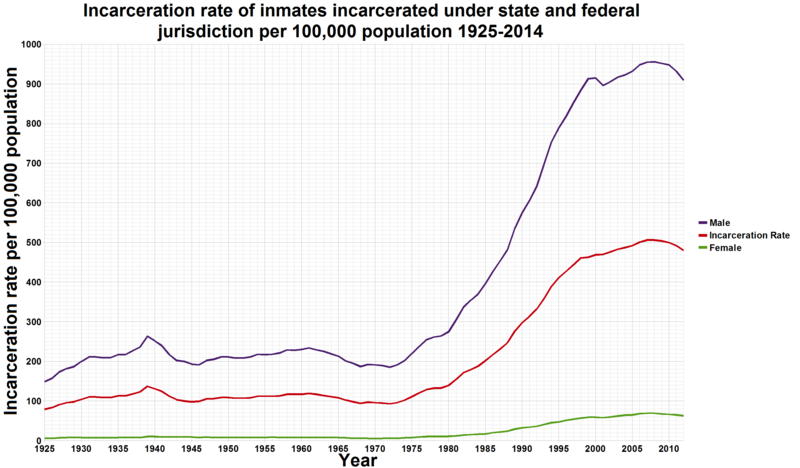 But don't do it openly. Give it a catchy name, like "The War on Drugs." Since 1980, the prison population has quadrupled, primarily linked to the possession and use of drugs (not trafficking, which accounts for less than 29% of all sentencing.) And who amongst the racial groups have been slammed into jail more often than not, despite the fact that--again--the arrests rates amongst the races are almost the same?

(For you statehooders: Blacks/Hispanics go to jail far more often than Whites, although the arrest rate for drug possession/use is virtually equal amongst all three races.)

The first step to making the dominance system work is to deny a person accused of a crime (real or imaginary) the chance to properly defend themselves. That means sending them to jail, under control of the penal system, where their actions and reputation are severely curtailed. And the easiest way to do that is by denying bail.

Any "reform" that seeks to curtail a right is a process aimed at eliminating as much of that right as possible. Think about it and you will see how that path has led to the current fascism-trumping-rights system We see in the U.S. of part of A. Under the pretense of "security" or "public good", human hyenas skulk. Their goal is not "security" or "public good": it is "their security" and "their good at your expense."

The only rational, reasonable and responsible vote possible this Sunday is "No" to the so-called bail reform. The Larva's witless gambit is another step in the wrong direction. It makes Us put Our faith on a judicial system made up of a police force so corrupt it could not even police itself and on a legal bureaucracy so corrupt and inept it too has been targeted for investigation by outsiders.

Furthermore, it makes Us put Our faith on a political system so disgustingly vile, so nauseatingly corrupt and so horrendously stupid, that doing so would be clear grounds for arrest. And incarceration...without bail.

[Update: 17 August 2012: From The Miami Herald.com, a post titled "Puerto Rico: Visions of a Police State." Of course it supports My point: I'm right.]
Posted by GCSchmidt at 8:12 AM