Mayra Santos-Febres was the brilliant closing speaker of TEDx San Juan, with her topic about Our fear of literature and reading. As she said then, We refuse to read because it makes Us more insecure, and We refuse to write because it reveals too much about Us.

I interviewed her to explore these thoughts. Like many of Us here in Puerto Rico who love to read, as a child she noticed that reading was cast in a negative light. Comments like "You'll go crazy" or "It will hurt your eyesight" were common, along with "It will make you think" and "Men don't like women who are smarter than they are."
For Mayra, this anti-reading bias was not really gender-based, or race-based, but based on class. Her middle-class upbringing placed a premium on "being private," of keeping matters under wraps, which extended to "keeping one's place" as well. Class mobility was not a virtue or a realistic possibility, so reading--which could encourage dissatisfaction, give one new ideas or reveal intimacies--was seen as dangerous. In Mayra's keen-eyed phrase, there was an imposition of "necessary silence."
This "necessary silence" could only be maintained through auto-censorship, so communication was per force oblique, hinted, veiled and incomplete. Mayra said she felt as if her family was constantly hiding a secret, and yet never knowing what that secret could be. Reading and writing were thus cast as tools of investigation--and discovery--the two enemies of secrets. 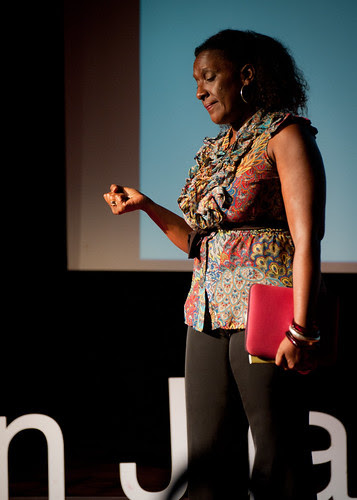 This secretiveness and view of reading/writing as dangerous stems, Mayra feels, from how closely interconnected Our families are, thus creating a tightly-woven society. Our social links within Our classes are strong, cementing identity with it, even if We also engage in linking "above" or "below". With numerous and close links, anonymity is harder to achieve. So is solitude, that fundamental nest of creativity.
In other societies, where anonymity is easier or stronger, literature flourishes. I mentioned to Mayra that while living in Oxford, Mississippi, I regularly spoke to a woman who knew William Faulkner and said she despised him. Her only other comment about him was: "All he did was write down what he heard around here." For insular societies--whether they are islands or backwaters--exposure of the dark sides is betrayal most heinous. But the South affords anonymity that Puerto Rico simply doesn't, where writers have to literally isolate themselves within the isolation or leave the Island to pursue their desire. The few voices that rise above Our "necessary silence" tend to pay a heavy price for their perceived defiance in threatening that silence.
The fear and rejection of reading and writing in Puerto Rico has another class component, according to Mayra. In her view, Our upper class, the wealthy movers and shakers, have less power than in other societies, so they are more fearful. I confess that hadn't occurred to Me and at first glance, I'm inclined to disagree, but Mayra's observation has an undeniable fact: We don't control Our economy, so how  "powerful" can mere managers be, even if they are "executive managers"? Those with some greater degree of local power are thus aware that it can be as easily taken from them from "above" as from "below," simply because they cannot isolate themselves enough from either.
This sense of isolation, energized by secretiveness and insecurity, permeates Our culture to the point of leaving Us ignorant (My word) of the outside world. As Mayra says, "the world" to Us is the "the United States and maybe Cuba and the Dominican Republic." The rest? Doesn't exist. And about the Dominican Republic, We have a prejudice, as many of Our families have relatives there and tend to deny that fact.
Another fact Mayra is aware of, as a university professor, is the growing number of women who are outpacing Our men in achieving higher education goals. She sees that trend as emerging from a societal viewpoint that believes that "For men to be men, they must be brutes" (strong, forceful, not bookish), with their primary school being "the street." For women, their primary school IS school and the home, thus pre-disposing them to achieve more. As to what that will mean 20-25 years from now, she doesn't know (no one really does), but she did note that, for now, men still have the dominant share of power in business and politics, and that maybe a more equitable power structure will emerge in those 20-25 years, possibly leading to great changes.
One change We agreed upon is that of overcoming "Our national dream." As I described My post about this topic to her, she almost said the same thing I did: whereas I said "Rescue Us," she said "Solve this for Us." Mayra and I agree that a society that waits for others to do what's needed isn't a society that will produce a large number of writers, that We are in fact Cinderellas without a prince to escort Us to the palace. If We could only understand that no one has to give Us permission to be what We choose… As Mayra pointed out in her TEDx San Juan presentation maybe We don't read so We don't feel worse about Ourselves.
To overcome this aversion, Mayra targets education and "the Island," i.e., Our pursuit of fragmented efforts. Schools need to upgrade and expand their curriculums and include more modern works, as well as a greater variety. As for society, too many well-intentioned projects, from book fairs to literary contests to curation, are running helter-skelter, each too small to have a great impact, fighting against each other for money and resources, eschewing collaboration and cooperation because of ego and/or the fear of being considered a "politicized" organization. As Mayra emphasizes, more could be done if a centralized policy were pursued, one aimed at creating a central repository of information about Our literature, past and present, and Our myriad literary-related events.
That's Mayra's dream: a digital collection of Puerto Rican literature. Not a single-spot archive, but a directory, a digital doorway into Our novels, poems, essays, plays, music and more. Maybe the burgeoning world of digital publishing could also serve as a platform for a "Neo-Boricua" literary movement, much in the way that blogging has become a platform for Our random and not-so-random thoughts.
Some interviews are drags, others are dances and a very few are days unto themselves. To speak with Mayra is like sitting on a beach veranda, a sunny sky and warm breeze as the setting of an easy flow of words. Not one is wasted. Her thoughts move along with the grace of a generous spirit, one that accepts what it sees because it is; no sense in rejecting it for what it should be. I could spend several days enjoying that scenario, engaging Mayra's mind and spirit, exploring that which is so different and yet so much like Me.
Not surprising at all, because when you think about it, that's what reading is, too.
The Jenius Has Spoken.
Posted by GCSchmidt at 8:12 AM