Observations On 3 Men I See Almost Every Day

There are three men I see almost every day. One of them, the one I encounter most often, spends 9-14 hours a day at the light near McDonald's, asking for money. He is invariably polite, fairly well-dressed in skateboarder faux-chic and offers quick advice, such as "Drive calmly" and "See the good around you." He is an admitted drug addict, looks the part, and I suspect he's using again.

The second sits on steps outside a couple of local stores night after night and aggressively asks for a quarter or half a dollar. He acts churlish if you give him a soft answer. There are no needle tracks on his arms, he seems well-fed and healthy, his eyes and skin are clear. If prompted to speak, he will quickly shift from a hard tone to a wheedling nasal whine, the proto-bully quickly morphing into victim mode. He once tried to block My path to re-ask for a dollar. I was carrying several small bags after leaving the drug store and maybe based on that, he made a move at Me. I dropped the bags and took a step forward. His eyes locked with Mine and he took off, nearly getting creamed by a passing car. He doesn't talk to Me anymore.

The third appears at the light where Our local two large supermarkets intersect with a hardware store. He is very quiet, rarely speaking. Tall, he looks like a junior college shooting guard. He wears a cap and fairly fashionable sneakers. He makes eye contact with about half the people in cars, but never reacts when he gets ignored or turned down. He'll spend 2-3 hours a day at that, sometimes skipping a day, but usually not more than 2 in a row.

I'm sure the first one, call him Juan, is essentially homeless. However, he bathes twice a day, using a friend's house for that. The second guy, call him Edward, is not homeless, but he pretends to be. He has keys in his pocket and I once saw him use one of them to enter a local apartment building. The third guy, call him Luis, is not homeless. He lives across from the local gun range, the one that punctuates My days with distant pop-pop-pop or rattatatatat sounds from morning to night. 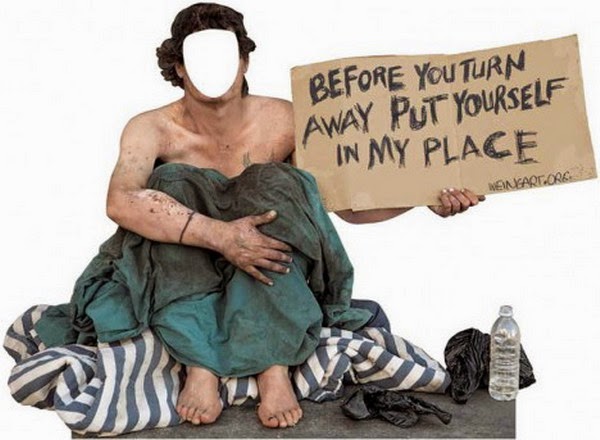 Are they lazy? Not really. They seem to work hard for their money, to almost-quote a disco goddess. Juan sometimes sells produce at "his" light, or hands out flyers, scrupulously limiting the handouts to one per person. Edward acts like work is punishment. Luis seems indifferent to work or anything other than his own thoughts.

Are they addicts? Juan was and probably has fallen back into that lifestyle. (Yes, it is a lifestyle, based on choice. Not a good one, but a choice nonetheless.) Edward and Luis don't fit the profile, at least physically. I'd say the odds are against either one being addicted to illegal drugs.

Are they useless? Most of the arguments against helping the homeless or those begging at large are based on (a) they deserve their situation, (b) they could get out of it if they wanted to and (c) they are simply parasites seeking more to freeload on. All three arguments are wrong, as most blanket statements tend to be.

No one "deserves" anything: it is either earned or imposed. Does a person "deserve" cancer, even if they smoke 2 packs a day? Actions and decisions have consequences, and many of them are accidental. Yes, you are more likely to end up homeless if you are an addict, but did the person "deserve" to be an addict?

The problem with "deserve" is that it implies a direct causal relationship where none might exist. Most people who end up homeless do so from events far beyond their control, so no, they didn't generally "deserve' it.

Unless they've been out there, living on the streets, a person will have no idea how hard it is to get out of that situation. When survival becomes the primary daily activity, how and where to get food, water, shelter and comfort (if possible), notions of "upward progress" are not options. Even if you wanted to climb out of that abyss and live a "normal" life, you would find it hard to take care of yourself, search for a job, rent an apartment or do any of the myriad things a person takes for granted when survival is not an immediate concern.

As for parasites, there is a large degree of that in folks who panhandle and beg. But job and work options are often denied to people who most need it because they look slovenly (having no place for shelter and to bathe does have its consequences),.have no permanent address or valid I.D. and have difficulty adhering to a schedule since, you know, surviving on the streets is not exactly subject to workshift patterns.

Does this excuse someone like Edward? Hell no. He's a punk with the chutzpah to con money out of people rather than making a living. I don't know about Luis, but I know Juan will work if you ask him to. I've seen it several times and he delivers to the best of his ability every time. But he won't accept being treated like a bum. He was selling newspapers for two weeks and the agent tried to keep the gas money Juan earned  (about $22 all told) because, of course, Juan doesn't own a car. So Juan quit.

If you react like Juan should have kept his trap shut and thus keep his menial job, you are a blithering idiot. Would you have taken that "deal"? Of course not. You won't let someone brazenly steal your money like that. And if you say "Yes, I would have," you are both a blithering idiot and a liar.

Our problem with the homeless, the panhandlers and the beggars is not them: it's Us. We act like their situation is a personal failing when in fact, it is Our collective failure as a society. We have failed to provide enough opportunities, enough support, for everyone to find their path to stability.

Can We "save" everyone? Hell no. Some people are self-destructive and there's nothing We can do to stop someone who simply insists on wrecking their life with alcohol (by far the most common addiction), drugs, violence, video games or any other of the thousands of potential obsessions humans can focus on.

But We can help more of Us by developing the kind of society that fosters self-growth, self-motivation and rewards honest effort fairly. Yes, I know I'm asking for My Island to change almost exponentially, but asking for less is part of the problem: We ask for less because We really don't think We deserve more.

As for what I'll do with the three guys I've mentioned: I'll still give Juan rides to and from his friend's house when the opportunity arises and maybe buy him a burger on the days he's selling produce; I'll wat to see of Edward is anything but a punk, and I'll watch Luis a couple of times to see what his deal is.

Can I help more than I am doing now? Certainly. Do I want to? Depends on what's needed and how much effort I have to make to pitch in and lend a hand. No one can truly help another if that help exceeds the capacity for helping. In other words, if it doesn't cost Me much, I'll make the effort.

It won't be enough, I know, but at least it's honest.

Here in Philadelphia, there is a guy who calls himself "Philly Jesus" because h dresses the part, and is out there now "preaching the word of God". On a recent interview he disclosed that when he was on the streets begging for money (to pay for his drug addiction), he was making, on average, $300.00 dollars a day. Now, multiply that for 365 days. He was making a killing.

Kofla! Good to hear from you!

"Here in Philadelphia"? Seems like every time I look around, I'm the last one left! Not criticizing: just noting reality.

I don't deny some people make decent money by begging or panhandling. I read about a guy in Manhattan who easily cleared $100,000 a year by being "a gentleman beggar." But that ain't for Me.

My angle on this post was to note people We often overlook and consider to be all alike. Given that opportunity here is largely linked to status, "who you know" and skin color (Let's not deny this, okay?), it isn't surprising that so many people choose an "easy" way out. Any clear-eyed look at what Our island REALLY offers as opportunity leads to the same conclusion: for many it's better to settle for handouts or move away.

For years I've been saying that Our Society is the result of Our Choices, but I don't deny that personal responsibility still plays a major role. I just wish, hope and work for a more inclusive opportunity set soon.

So are you having fun in Philadelphia? I'm a Pirates and Steelers fan so for Me Philly is just a place where "minor league" teams play!

Thanks for dropping back in!