"On June 15, 2009, the United Nations Special Committee on Decolonization approved a draft resolution calling on the Government of the United States to expedite a process that would allow the Puerto Rican people to exercise fully their inalienable right to self-determination and independence. Subsequent actions by the governments of the United States and Puerto Rico paved the way for the Puerto Rican status referendum, 2012, scheduled to be held on 6 November 2012."

Okay, Wikipedia is far from the end-all and be-all of reliability, but this brief paragraph manages to confuse an already muddled issue. To wit: "Subsequent actions by the governments of the United States and Puerto Rico paved the way for the Puerto Rican status referendum, 2012, scheduled to be held on 6 November 2012." What amounted to "U.S. government action" was a barely-mumbled "Go ahead." Nothing more. But it sure sounds like the U.S. of part of A. was fully on-board, huh?

Now Let's go to the "Recent Developments" section of the Puerto Rico entry, where We'll find the Big Lie: "For the first question, 54 percent voted against the current Commonwealth status, and in the second question, over 61 percent favored statehood."

As an Anonymous commenter said about My post "33.1% Statehood = Nothing":

Anonymous was spot-on, with less than 46% statehood "support". Where did the 61% come from? From the enormous dropoff between the first tier of votes  (Yes/No to current status, with over 1.74 million votes) to the status options, where only 1.3 million votes were cast. Yes, over 480,000 people left the second tier blank, or in My case, wrote IMPOSSIBLE across all three options.

[Note: I wrote a lengthy response for the Comments section of that post where I (a) acknowledge that 33.1% is NOT the right figure and (b) indicate that I was trying to play the "numbers lie" that the statehooders were trying to pull, only I did a poor job of giving that context in the post. Where that comment went, I have no idea. But the gist of it is repeated here.]

So the true percentage of statehood votes can be calculated: how many votes for statehood divided by the total number of NO votes. And that comes out to about 45.6% or less.

Not a mandate by ANY stretch of the imagination and another bitter defeat to shove down statehooders' throats. Although given their losing record on Election Day, their throats are way over-jammed with defeat. 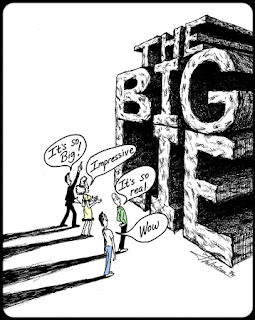 So what the statehood party did was to quickly embrace "The Big Lie." Grab a number that somehow puts the best face on denying reality and run with it. For recent expertise on this propaganda technique, reference FoxNews(hit); for historical perspective, track down one Joseph Goebbels.

What it all boils down to is knowingly lying loudly and repeating the lie as often as possible to make people believe it is the truth.

But it didn't take long for media outlets to catch on that "61%" was another example of--in Twain's words--"Lies, damn lies and statistics." From ABCNews to Yahoo! to The Huffington Post and even some dim-bulb backwater like Red State figured out that, no, Puerto Rico had not asked for statehood; that in fact, it hadn't even come close, since after all, the referendum or plebiscite or whatever was non-binding. Again.

And yet...they kept repeating The Big Lie, that "61%" that made it all seem like Puerto Rico was marching on Congress to pound the doors down with their "Our statehood demand." Dramatic story. Stirs emotions, both pro and con. Is all a lie.

The goal of The Big Lie is to frame context, to force-fit an issue in an angle and perspective that benefits the propagandist. It is a deliberate distortion, a bare-faced fib aimed at tricking the unwary, the mentally lazy, the largely-indifferent and inflame the fanatical base. That's why it works: because most of Us fall into one or more of those categories. Harsh, but true.

Ultimately, The Big Lie either becomes its own reality--see FoxNews(hit) and the "America" they present--or comes crashing into Truth and pops like a soap bubble. Either way, The Big Lie is a short-term strategy, aimed at tilting a battlefield to preserve or extend or steal an advantage. It cannot win a war, much less when the battlefield, like Ours, is neither defined nor powered by will.

For The Big Lie to work, it has to matter to enough people to act upon it, rightly or wrongly. When it comes to Our status, We don't care enough to want to act, even to make a firm decision, much less see it through. And when it comes to statehood, well, neither We nor the U.S. of part of A. gives anything close to a damn about it. If anything, too many of Us are willing to debase themselves to achieve "dignity" and "self-respect," a Big Lie that has led to the "61%" Big Lie...that will lead to another in this chain of political fibs.


[Update: 15 Nov 2012: U.S. of part of A. Republicans in the House are "doubting" the plebiscite results, basically doing the "When you make up your minds" shuffle-dance that's been the staple cover-up for decades.  Sadly, the only men that can dance well enough to hide the truth are named Astaire or Kelly. And they're dead.]

If this administration is good at something, it is to use public relations and advertising to advance their in theory pro-statehood agenda. I say in theory because to have people believe they're really pro-statehood is part of this smoke and mirrors trick. Wasn't this the same larva that came up with the Puerto Rico does it better ad campaign you can see in the U.S.? There is very little to be seen that has been made by them, apart from ads. So this 61% is all a sleight of hand. It seems it has work on some Puerto Ricans. Talk about Jedi mind tricks.