Every morning for the past 15 years or so, I drink coffee from a beige cup. Some sort of plastic, thick-walled, but light. For those who know Me and My kitchen utensils, beige is like having a Honda scooter in a Harley warehouse. Most of My stuff is brightly-colored: shiny blue, sparkling orange, dazzling yellow. Beige is definitely not like that. 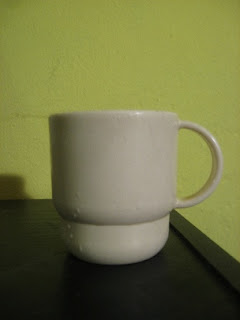 I have other cups, some in dazzling colors. Given how much coffee I drink, I could go with a bigger mug (I have one with a Steelers logo) or if I want to cut back a little, I can go with a half-sized bone white cup with a deep royal blue edge. No. I stick to the beige cup. It has a couple of chips in it, probably from being a dropped a time or two. (Never thrown. Stop spreading rumors.) The inside has some dark lines that might be warning signals as to the more negative aspects of coffee. It doesn't matter.

The cup is very familiar to Me, more so than almost anything else I have. So much so that when I visit My mom's house and open her cupboard to get a water glass, it stuns Me to see three other beige cups. Like Mine, only newer.

Now those of you who have read "The Little Prince" and loved it know where I'm going with this. Those three beige cups are like Mine, in form and materials. They are newer, brighter even, if beige can be said to be "bright." For My coffee, a cup is a cup. Even if I ignore every other type of cup in the world, a newer beige cup might even be better at keeping My coffee warm for Me, or it might even taste better since the interior would be...unstained.

My cup is Mine. Scarred and stained, a bit lopsided now that I look at it more closely, it is Mine. Its sheer presence in My hand, as part of My days, has made it special to Me. Unique. Mine.

My point is not about possession. Seeing as how My cup is just some kind of plastic in a neutral shade, if possession were the motivation, I would want to have all four of the beige cups and many more. Start a collection! Reach double digits and soar! Use a different one for every time I drink coffee until I reach the end of the lot and then start again. Cuts down on the staining, Methinks.

No, that's not the point. The point is that this beige cup, the one I just set down, has Me invested in it. Unaware, My simple choices added up to what can only be called a bond. I can use anyone of 19 other cups at hand (and about 2 dozen more stored for fancy-shmancy events I don't intend to hold), but I don't. I choose a plain beige cup. Correction: My plain beige cup.

In obvious and subtle ways, Our choices define Us. We can't escape that, so it has the force of a natural law. But We often act like Our choices don't really matter, that they are really nothing more than random acts, even ascribing some or many of them to "outside forces." If it weren't so sad I'd say it was droll. Yes, some choices are out of Our hands, but most are not. And that's how it is, whether We acknowledge it or not.

I'm having more coffee. You already know what cup I'll be using.