My house was flooded again. Now I know I could live someplace else; that's not the point. The point is that I like this house, I like the neighborhood, the neighborhood likes Me and the problem--flooding--is not some natural aspect of where I live, but a problem created by stupidity. Fucking stupidity.

Here's the photographic sequence, with times: 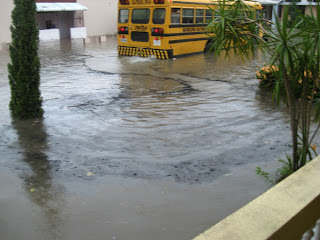 8:34 AM: After barely 95 minutes of rain, some of it heavy, but nowhere near the amount other parts of My Island received, the water's coming up to the level of My balcony. A school bus becomes a rescue vehicle spewing oil and diesel into waters that are either in people's houses or about to flood them. Only two people were inside the vehicle at this point: the driver and a young man who opened the widow and asked Me if I was leaving the house. Seeing as how he might have been a city employee, I chose not to let him steal My stuff. (Yeah, I said it.) 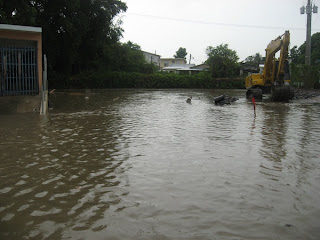 8:57 AM: The water flooded into My house at 8:39 AM. After checking to make sure I had secured what I could from water damage, I called My Mom to update her and wish her a Happy Birthday. (Priorities, people.) As We talk, I notice the water in My house is flowing outward, which made Me think that water was coming in from behind the house, adjacent to the large drainage canal. A quick check proved that idea wrong. The water was flowing out of the house because all the water in the street was flowing away. I took this picture of why that happened. 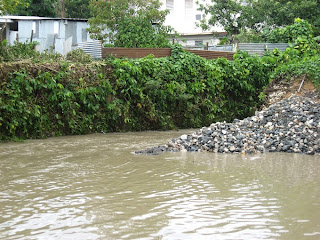 8:59 AM: The water on My street was there because the drainage project being built (that started just before the storm season) had created a dam--a fucking dam--to stop the water from flowing out and away from the street. Made from rubble (dirt, sand, gravel, rocks) it held back the rainfall, rising high because--once again--the drainage system was blocked. The whole idea of this project is to STOP THE FUCKING FLOODING. Instead, they actually MAKE THE FUCKING FLOOD HAPPEN. 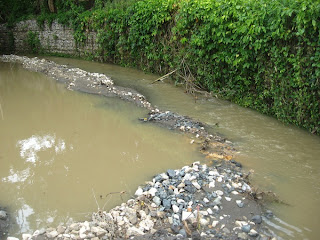 Here's the proof: a picture taken at 3:17 PM, after My Sister, My Nephews, Mrs. Jenius and I had pretty much cleaned the house enough to make it comfortable. Note the rubble dam. The narrow canal to the right drains water from the other side of My neighborhood, with the water flowing to the bottom right corner of the picture. At one point, after the fucking dam gave way, the flow was so strong it carried away 50-gallon trashcans full of garbage. A flow that strong was needed to create outflow from My house, and would rain the street quickly. 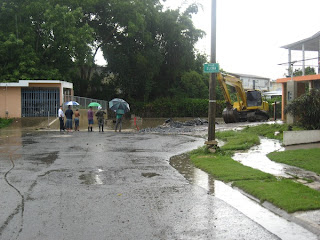 9:37 AM: Although it was still raining lightly, and would rain more during the day, the street was clear of water. Draining the entire flooded area took 43 minutes and if it had happened 9 minutes sooner, My house would not have had 2 inches of water lapping at the walls. If I had known that fucking dam was there, I would have removed enough of it to avoid the damage. And if I see it again, I will. Fuck the contractor. Fuck the city government. Their stupidity and finger-pointing to avoid responsibility needs to be slapped. Hard.

Storm season ends in October, possibly early November. According to workers on this site, the drainage system--whatever it ends up being--is scheduled for completion in mid-November...or maybe closer to Christmas.


The Jenius Has Spoken.
Posted by GCSchmidt at 3:12 PM

You think thats stupidity? Check this out:
Look at the drains from the Tren Urbano columns:
https://skitch.com/e-gabopagan/fuqww/gabriel-pagan-google

Yeah, it's all a massive clusterfuck. The Urban Train, I mean. The drains are just part if it.