Unrelated to that announcement:


"Chairman and Chief Executive Officer Richard Carrión’s sister and two of his nephews, one of whom is also a Popular director, have delinquent property loans to the San Juan-based lender, according to a regulatory filing. The bank has also restructured the loans of another director, the board’s head of corporate governance, and classifies his debts as “troubled,” the filing shows.

'The disclosures are seriously problematic,' said Orin Kramer, whose Boston Provident Partners LP hedge fund owns about 2 million Popular shares. 'The role of the board is to protect against credit losses, not create them.'”

“'This deal does smell like rotten fish,' said (James) Post, who was co-author of “Redefining the Corporation,” a study of governance and accountability. “It immediately raises the question: Have there been other deals of this sort that have gone on, and are shareholders entitled to know about that?”

The loan is among the latest “related-party transactions” between (the nephew of Uncle Richard, José) Vizcarrondo and Popular, which paid companies linked to him at least $33 million since 2004, regulatory filings show. The bank posted $1.87 billion of losses from 2007 through 2009 under Carrión, who has been Popular’s CEO since 1994 and a director of the Federal Reserve Board of New York since 2008."

From the same source, further down:

"Desarrollos isn’t the only company linked to Vizcarrondo to gain from Popular contracts. The bank paid $33 million from 2004 through 2006 to Metropolitan Builders SE, a firm in which Vizcarrondo is a partner, proxy filings show. This company was awarded construction contracts valued at $52 million in 2002, the filings show."

And for losing $1.87 billion, how much does Uncle Richie Wretch make? "Carrión’s overall compensation, including stock, increased 67 percent last year (2010) to $1.8 million, according to the proxy filing." Woo-hoo!  A 67% raise and rampant nepotism, too! Way to go, Richie Dead Meat! ("Carrion" as it is properly defined, in this case...)

Another little fillip of rotting meat: Banco Popular still owes $935 million to TARP, the second-highest such debt in the U.S of part of A. banking system. They're #2! They're #2!

But then there's more back-office butchering going on here...

"Manuel Morales Jr., Popular director and chairman of the board’s corporate governance committee, owes the bank about $1.5 million through different lines of credit, according to a filing. The board agreed to restructure his debts in December, changing most of them to three-year term loans. While Morales is “current” on his obligations, the loans “would be classified as troubled debt restructurings,” according to the bank."

Oh. So if you're IN the bank, you don't have to deal with the pesky little rules of actually running the bank properly. That's good to know. Especially since the Feds noticed long ago (well, last year, at least) and placed Banco Popular under its direct scrutiny "due to failings in the bank’s management of documentation concerning property loans."

Banco Popular is the largest local bank, with over 40% of all Our deposits; its closest rival is at 17%. As an economic pillar, Banco Popular is more like a ragged toothpick, using its local weight to squat and crap on Our growth with its near-monopolistic powers. 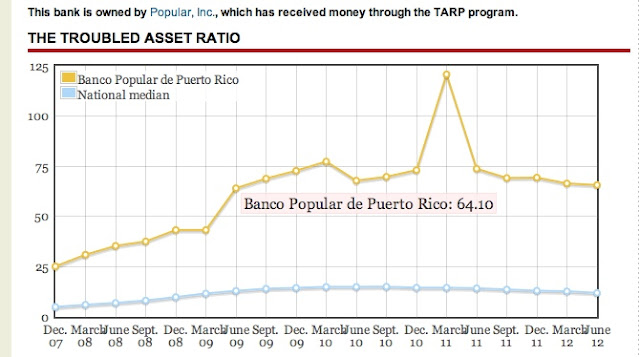 Banco Popular is weak, troubled and run by nincompoops. TARP cash kept them afloat and because no other bank in their right mind would deal with the Dr. Moreau-like scenario here, the Feds handed Banco Popular pretty much all of WesternBank's cherry-picked "good assets," in a deal that shut down a weakened bank and propped up another.

Some analysts are touting buying Banco Popular shares. One even compares that purchase to that of buying lottery tickets. But that same "lottery gamble" source thinks alternative good buys are Doral Financial Group (DRL) and First Bancorp (FBP), numbers 2 and 3 amongst local banks. So it's not that Banco Popular is a hidden gem: it's that Puerto Rico's hybrid faux-economy could yield good deals if it kicks back into high-consumption gear.

I'll repeat Myself: Banco Popular is an obstacle to Our growth. It is a massive financial roadblock sitting squarely in key industrial and business sectors: construction, commercial loans, mortgages and personal loans. It dominates a weakened economy that was weaker than it should have been because Banco Popular--through its near-total control of 936 funds--used that money to build a national base (now rebranded as "Popular Community Bank") rather than truly build Our Island. In effect, it colluded with Stateside firms to zip profits back home, rather than invest them locally, as Section 936 intended.

Given that Banco Popular has long been run like a friquitín's greasy cash box, where any José, Julio or Manny can grab a handful of dollars and waltz away, that its economic base has been self-eroded, that its strategy is more "survival" than "revival" and that it believes Uncle Richie is worth more than $1.8 million to lead them exactly nowhere, I say it's time to topple Banco Popular.

The sooner the better. For Our Island's best and brightest sake.

It's not time to topple Banco Popular, it's time to get rid of the Federal Reserve and get the United States back into a free economy and not the crony capitalism (that most people confuse with a free capitalist economy) it has been running under since the creation of the Federal Reserve. That is how you take care of all the "Banco Populares" of the world, by cutting off the head.

Sorry Gil, but I had to chuckle out loud when I read "the Feds noticed long ago (well, last year, at least) and placed Banco Popular under its direct scrutiny". The Feds are more crooked than Banco Popular will ever be. The U.S. gov. is so corrupt I don't even bother following the corruption on the island much anymore as it is so small in comparison. Morals have degenerated so much in the United States that we all saw the rigged voting in both political conventions where teleprompters were being read during voting sessions and it was already all written down. When the nay's won, and you could clearly hear it even on video, you would see the words "and the yea's have it, the resolution is passed.." on the teleprompter!

And what about that other video where a Mayor at one of the conventions (I forget which one it was) was already told to say the yea's won, but couldn't because he was already being booed, it was so bad that a convention delegate(?) came out (a woman) and could clearly be heard telling the Mayor to continue "as they are going to do what they want", LOL! In other words, the other irate delegates on the floor knew their votes were being stolen so brazenly right in their faces!

...it is a Zeitgeist-like nightmare, yet I believe it is true...they are only taking advantage of the Jekyll Island inspired Fractional Banking System, and making away like bandits, lining tpheir own pockets and constantly leaving us standing up without a chair when the music stops...as we cannot force banks to go into Full Reserve status, the choice is clear...let us begin to do bank runs, starting with the biggest, most bloated fish...we can take them one by one, and put, in the mean time, our deposits into credit unions...that'll sure have them whimpering...

I love the idea of bank runs because it isn't difficult to do and it hits banks exactly where they live: the cash cache. If 2,000-3,000 people swarmed into Banco Popular branches and demanded to get all their money in cash, word would spread like wildfire and the tipping point would be in our favor.

I'd love to see this happen. Oh yeah.