How Fascist Is Puerto Rico? Part I

Way back in the dawn of time--2004, to be exact--I commented on an article titled "The 14 Characteristics of Fascism," by Lawrence Britt. I posted My comment to a forum, amidst the horrified reaction of the murderous moron stealing another election and Tullyvision Studios picked up the post. Still has it on their website, too.

Now back then, I applied the "fascism prism" to the U.S. of part of A. Still do, which is why I can tell you that Obama has done practically nothing to reverse the trend. (Keep that in mind in November, okay?) And though I had a couple of "Hmmm" moments concerning this topic and My Island, only now does it seem imperative I apply Britt's description to Puerto Rico. You'll see why. 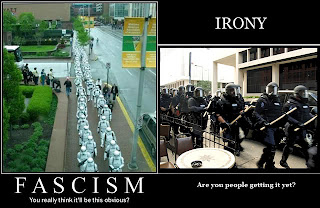 Here are the first 7 characteristics of fascism and My comments:

1) Powerful and Continuing Nationalism. Fascist regimes tend to make constant use of patriotic mottoes, slogans, symbols, songs, and other paraphernalia.

CHECK. We are, to put it mildly, as jingoistic as the worst colonial outpost or the defeated Deep South can be. We don't know exactly why We act that way, but We do and think it's a really good thing.

2) Disdain for the Recognition of Human Rights. Because of fear of enemies and the need for security, the people in fascist regimes are persuaded that human rights can be ignored in certain cases because of "need."

NOT YET. What keeps Us out of CHECK (get it?) is the federal government watching over Us, but We're not far from clipping rights: the legislature already has--on the books--a mandatory 3-year sentence for disrupting their """work""" or disrespecting them. Whittling away at rights never makes them stronger.

3) Identification of Enemies/Scapegoats as a Unifying Cause. The people are rallied into a unifying patriotic frenzy over the need to eliminate a perceived common threat or foe.

CHECK. "They" are evil. "They" are crooks. "They" are ruining Us. Everybody says that, whipping up a frenzy of largely political smokestorms that obscure the real problems We have, to the benefit of those basically creating and gaining benefits from those problems. 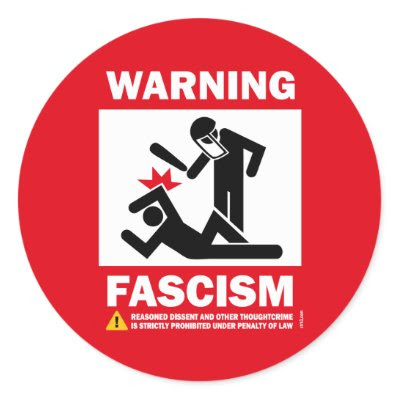 4) Supremacy of the Military.  Even when there are widespread domestic problems, the military is given a disproportionate amount of government funding, and the domestic agenda is neglected. Soldiers and military service are glamorized.

CHECK. "But Jenius, We don't have an army." Yes We do: the police. Under The Larva (there's an image...) the police have received more funding than ever before and--pay attention to this--a larger advertising budget than they've ever had. Despite this, crime is rampant and corruption in the police force is endemic. But does the government tackle that as a problem? No chance in hell.

5) Rampant Sexism. The governments of fascist nations tend to be almost exclusively male-dominated. Under fascist regimes, traditional gender roles are made more rigid. Opposition to abortion is high, as is homophobia and anti-gay legislation and national policy.

CHECK. Women do hold positions of power here--visibly--but are often cut out of the real power structure (cut to house president Jenniffer "Gluttonny" González nodding her head...) Opposition to abortion is opposition to a woman's choice, homophobia is widespread in government to the point of wanting to needlessly and stupidly amending the Constitution to define marriage as "between man and woman," an intrusion into personal lives that has no politically rational basis.

CHECK. I've made My position very clear about the Ferré-Rangel cartel, but other media are equally compromised to the point where they are nothing but puppets. In one case, that of Antulio, who cross-dresses up like a puppet, the metaphor is reality, as his colon houses the elongating arm of one Thomas "Mad Dog" Rivera.

7) Obsession with National Security. Fear is used as a motivational tool by the government over the masses.

CHECK. We don't have "national" security here: what We have is "power structure" security. Watch the current campaign closely and see how fear is the primary motivator of almost every ad. Listen to press conferences to see how fear is used as the stick to make you stand where they want you to. Notice how fear permeates the public discourse. Those in power are afraid of Us, so they use fear against Us. Seeing how corrupt, venal and useless they are, one can glimpse how fear becomes their god, their shield and their weapon.


In this first half of the list, We're 6-for-7. On a scale of 1 (Utopia) to 100 (Utterly fascist), I'd say that on these characteristics, We're at about 74. Certainly nowhere near good, but not so lost that We have to go all French on the government's ass and take to the sewers to start killing the rats.