This Is Our Brain(Dead) On Drugs

Let's say your house has termites. You want to get rid of the termites so you hire an exterminator who checks the place out and reports that there are about "200,000 termites" in your house.

He sells you this package deal where he will come back every month and rid your house of termites for $25 a month. You decide that sounds fair and the exterminator unleashes his attack on the termites and leaves.

Comes back the next month, does the same, collects $25. The third month he tells you that he's got a new solution to rid your house of termites and it will now cost $35 a month. You say yes and the exterminator does his thing. But now, every month, the price is going up $5-$10, and then $20-$30 and then for some spastic reason, the monthly rate goes up $80-$100 at a time, so that 40 years later, you're paying $1,000 a month to get rid of the termites in your house.

Would you pay someone 40 TIMES the original estimate to do a job that the evidence shows is NOT GETTING DONE? 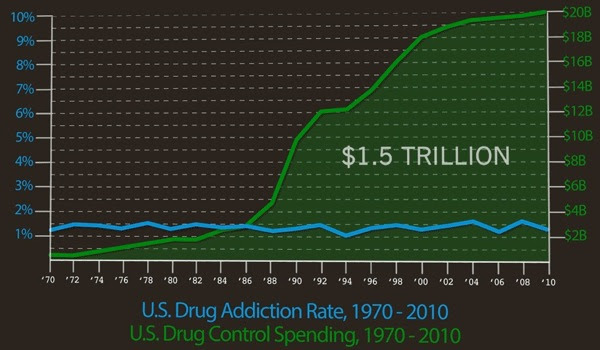 Well then, welcome to the fantasy horror that is the U.S. of part of A. """drug war""". Here's a table of the budgets assigned to this 4-decade long attack on minorities--I mean--assault on illegal drugs.

There you have it: The """drug war""" as sociopolitical poison.

Why am I yapping about this? Because the """war on drugs""" has another function, aside from suppressing minorities and skewing """the justice system""": it is a near-bottomless pit of money for power-building purposes.

Simple example: Politician A, a highly-connected hookworm sucking the blood out of the body politic, rages against crime and how "the public deserves protection" and thus lobbies for more police funding. Gets a buttload of cash, of which maybe--maybe--20% goes to actual cops, who largely use it to attack minorities. Crime stays about the same, Politician Hookworm looks good in the polls, the cops get some walk-around money to harass citizens and pocket some of the stuff they decommission and We? We get screwed. Over and over and over and over and over and over. And over.


If addiction rates increase, drug warriors need more money to increase their efforts, or to use new and more expensive methods.

Because it isn't a """drug war""": it's a sociopolitical assault to increase power bases.

So the next time you read or hear The Larva or one of his buttworm buddies mouthfart about "decreasing crime" while hundreds of "drug-related" murders bloody Our streets, think about this: the murders fuel fear and that fear is exploited to get monies to keep the fear going.

Our fear for Our safety is being exploited by the assholes We elect to preserve and improve Our safety, but who prefer to wall themselves off from Our scrutiny--from Our Constitutional right to tell them what to do and how to do it--to engage in illegal self-serving machinations in order to loot Our taxes for their benefit.

It's time We fired back.

...back at the end of his term, President Dwight D. Eisenhower warned the Nation about the increasing influence and power of the "Military Industrial Complex". Their influence can be directly related to the Vietnam aWar, and other wars later held in theaters near you. The "War on Drugs" is no exception, since the manufacturers of all implements and hardware used to fight it are...guess who...Bell Helicopters, Raytheon, Inc., the Boeing Conglomerate, Northrop Grumman, and the rest of their ilk...do the names sound familiar? You bet...

You are right. These companies have made billions of dollars in sales to """the drug war,""" with a huge chunk of that money going into the pockets of smelly vermin We elect. And ALL of that money was Ours, taxes We paid to get government services that have been cast aside to achieve nothing--not a thing--in """the war on drugs.""" Except, of course, launching the prison industry...

You're right! They would easily be in the Top 3!

...so...this is how democracy dies...we have privateers running services which were and still should be run by the state or federal government, whichever has sent its citizens into confinement... these "security services" companies could make the Schutzstaffel look like Mister Rogers...and, since there is no such thing as "enough profit", in addition to our tax dollars we allow them to "legalize" slave labour to keep these filthy companies on the obscene side of the earnings chart...now, what was the name the good old Duce used to describe his government in Italy...was it not "Stato Corporativo"? I think, however sad and wrethced the thought might be, that we are on the same course...

You quoted "Il Duce(bag)" correctly: fascism is government run by corporations. And to think this whole "for the sake of security" fiasco was anticipated by the Founding Fathers (Jefferson, Adams and Franklin, in particular) and the methodology by Orwell. We're so stupid...until We fight back. Then We're scary.